Angels in the Dust
Directed by Louise Hogarth
My rating:

The inspiring story of Marion Cloete who with her family fearlessly walked away from a life of privilege in Johannesburg to start an orphanage for more than 550 South African children. For a nation overwhelmed by the HIV/AIDS epidemic and recovering from Apartheid's legacy Marion's orphanage offers a pathway of hope. A documentary on the amalgamation of an army of brainwashed children in Northern Uganda by a religious fanatic named Joseph Kony. Since 1990 Kony amassed more than 12000 children and forced them to commit unspeakable crimes against their families and communities. This video illustrates the rehabilitative efforts put forth by the Ugandan people to compensate for these atrocities The Devil Came On Horseback
Directed by Annie Sundberg and Ricki Stern
My rating:

This documentary presents a first-person account of the genocide in Darfur. Former Marine Captain Brian Steidle joined the African Union in 2004 to help monitor the cease-fire in Sudan. When his contract ends, Steidle leaves in disillusionment. He wrote his reports and took his pictures, but nothing changed. Since reporters lacked the same degree of access, he goes to The New York Times, and they publish his photographs. The soldier-turned-activist proceeds to spread the word everywhere he can. From National Geographic, AFRICA is a groundbreaking eight-hour series captured over two years of filming in 11 countries. This epic series presents Africa through the eyes of its people conveying the diversity and beauty of the land and the compelling personal stories of the people who shape its future. (Part 4: MOUNTAINS OF FAITH: Discover Ethiopia's rugged beauty and ancient traditions in a tale tracing the lives of two ambitious young men on the brink of manhood). Long Way Down
Directed by David Alexanian and Russ Malkin

Long Way Down stars Ewan McGregor and Charley Boorman in an epic journey as they drive their motorcycles from Scotland to Capetown, South Africa. 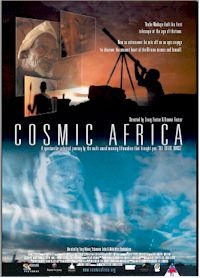 In a journey that stretched from Namibia to the coastline and steamy jungles of Ghana, across crocodile infested lakes and deserts of Northern Kenya, the cliff-side dwellings of the Dogon in Mali and on to the mysterious archaeological sites of the Egyptian Sahara, the recently launched film Cosmic Africa explores Africa's ancient astronomy history. Cosmic Africa, a co-production between Cosmos Studios, Ã…land Pictures and Anne Rogers is a unique 72 minute feature length documentary film that both explores and sheds new light on traditional African astronomy and in turn global understanding of the world's oldest science. Cosmic Africa is directed and filmed by the multi-award winning duo, Craig and Damon Foster.

The Great Dance is a film about three San (Bushman) hunters and their extraordinary relationship with the land and the animals. This film shows Africa in a new light, and ancient light not seen before. It shows man and animal at their most extreme limits of endurance through the ‘chasing hunt', a ritual never before revealed to the world outside the Kalahari.The Great Dance as a film has received over 30 major international awards. Now the filmmakers have created a DVD that reveals the many layers of information and debate that lie beyond the film. World renowned athletes, anthropologists and psychologists add exciting insights and explanations. Amongst many features, the DVD offers two short films about the making of ‘The Great Dance' â€“ the viewer can even play the ancient rock gong that was used to create the soundtrack.